According to a new report from RealtyTrac, the first wave of 7.3 million homeowners who lost their home to foreclosure or short sale during the foreclosure crisis are now past the seven-year window they conservatively need to repair their credit and qualify to buy a home.

More waves of these potential boomerang buyers will be moving past that seven-year window over the next eight years corresponding to the eight years of above-normal foreclosure activity from 2007 to 2014.

“The housing crisis certainly hit home the fact that homeownership is not for everyone, but those burned during the crisis should not immediately throw the baby out with the bathwater when it comes to their second chance at homeownership,” said Chris Pollinger, senior vice president of sales at First Team Real Estate.

“Homeownership done responsibly is still one of the best disciplined wealth-building strategies, and there is much more data available for homebuyers than there was five years ago to help them make an informed decision about a home purchase,” Pollinger said.

RealtyTrac analyzed foreclosure, affordability and demographic data to provide predictions of when and where these boomerang buyers are most likely to materialize.

Nearly 7.3 million potential boomerang buyers nationwide will be in a position to buy again from a credit repair perspective over the next eight years. Here’s how those emerging boomerang buyers break down by year. 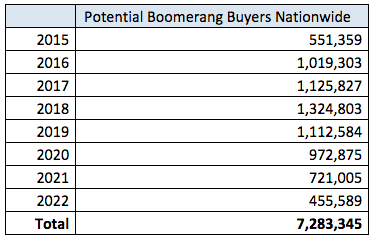 Markets with the most potential boomerang buyers over the next eight years among metropolitan statistical areas with a population of at least 250,000. 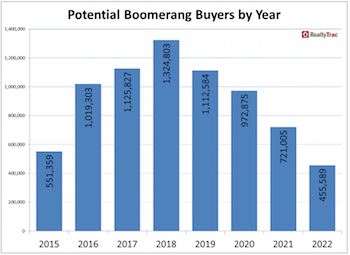 Follow Bringing a little Clarity to Homeownership on WordPress.com